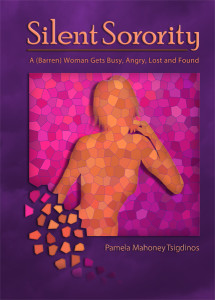 An award-winning book and the first in the infertility memoir category not written by a mother.

Imagine learning that your body is incapable of ever conceiving a child. There will be no fruit of your loins. One instant you are like everyone else. The next, you’re not. Your DNA now ends with you. You are infertile.

Your branch of the family tree will forever be just a truncated twig. You’ve been denied a rite of passage, a biological imperative. You had no say in the matter. It wasn’t a conscious choice.  The comfortable sense of continuity and legacy others take for granted disappears in an instant.

Take a moment to really think about it. What are you supposed to do? How do you feel? Is there a particular way you’re supposed to feel? I mean, really, how do you prepare for that?

Okay, now you’re supposed to get on with your life. You know, have a nice day.

Infertility is a touchy subject. It’s supremely personal, involves sex organs, and is one of the last arenas where it is fair game to heap scorn. That’s because conventional wisdom today leads many to believe that infertility is self-inflicted, or a byproduct of feminism gone bad – ergo it’s okay to withhold any sort of compassion or show of interest.

In social psychologist Melvin Lerner’s book, The Belief in a Just World: A Fundamental Delusion, he argues that people want to believe in inherent justice, and that people who appear to be suffering are in fact responsible for their own situations.  According to the “just world” hypothesis, society has a strong desire or need to believe that the world is an orderly, predictable, and just place, where people get what they deserve.

Funny thing though. I have yet to meet or come across anyone who deserved infertility, and I’ve come to know quite a few women (and men) of all ages, ethnicities, religions and political views who have had to confront the condition. Those in my silent sorority are far from a homogeneous group.

What I can tell you about my sisters and me is that we freely donate our time and dollars to causes that help children in particular and society in general. We pay our taxes. We vote. We recycle and we worry about global warming. We cry when tragedies strikes. We laugh at the absurdities life serves up far too often. We love life.  We are in awe when we experience nature at its finest.

The primal urge to create is a powerful one.  In my case, there were several times when we were in our 30s that my husband and I resolved to accept that our bodies were simply incapable of conceiving a child. We did our best to be rational, to not let emotions or primal longings dictate our life. We were, after all, supposed to be “evolved,” right?

We looked at the statistics. We debated the trade-offs. We decided that the world didn’t really need a little Pammie or an Alex Junior. We dedicated our naps to friends who were fighting sleep deprivation from long nights with colicky babies. We tried to reassure each other, with a smattering of superiority, that we were more than our fertility. That worked for several months at a stretch. Then the urge to reproduce would come back larger than before, propelling us forward with the next medical treatment, the next in a line of what almost felt like hokey-pokey-esque routines aimed at getting our cells to commingle.

I’m still waiting to overhear a couple on the verge of starting a family who enthusiastically say, Let’s not try using the old fashioned way. Whaddya say we go the high tech route? It’ll be great! We can give a few of the local hospitals and fertility clinics a whirl. You know I’ve always wanted to have my private bits examined at length by people in white coats. And those hormones injected with the long needles? What’s more romantic than that!? Won’t it be great to spend thousands of dollars on treatments not covered by our medical insurance, with no guarantees? What ARE we waiting for?

Taming biology is not quite as simple as many think. I challenge some of the nearly billion parents on the planet who have reproduced to turn back the clock and shut off that part of their brain stem – turn off that sex drive, too. (They are apparently related.) As evolved as we claim to be, Mother Nature still exercises some serious power over us.

Convoluting the matter, baby-making gets wrapped up in political or religious arguments. Somehow our society has lost sight of the fact that outside of the arm waving and pontificating about the negative impacts of feminism and who controls reproductive rights, a slice of the population (12 percent) face a very personal sadness.

At its core, infertility involves two individuals who love each other and yet cannot joyfully, spontaneously conceive. But there’s more. In the wake of conception failure, I’ve discovered that as hard as the loss of pregnancy and “normalcy” was, making a life in the long shadow of infertility has its own unique challenges. With the stigma and judgment surrounding this difficult human experience, it’s not surprising that many choose not to speak about it. The silence, though, can be deafening and defeating.

Start reading now…Sample or purchase Silent Sorority as an iBook for Apple’s iPad, or as eBook at Amazon’s Kindle Store, Barnes & Noble, Kobo, or Smashwords…or you can order the print version on Amazon.com